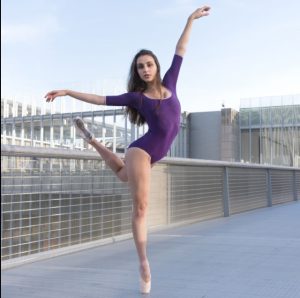 “Bravery and freedom” defined a revolutionary year in Greta Abbey’s lifelong dream of a career in ballet. The two wholesome values are also her words for how one of her Lower Elementary teachers at the Montessori Community School influenced her approach to creativity a decade prior.

“Don Henchel,” she said, “taught me to express myself with bravery and freedom. Among a number of lessons that fostered these qualities, he had us regularly memorize and recite poetry.”

Based on the volume of eyes and level of scrutiny on her last fall, perfect recitation was never more important. There she was, on the stage of the prestigious Joffrey Ballet in Chicago, playing the title role in an abridged production of Raymonda.

“It was the first time I had ever performed a solo in such a professional environment,” she noted. “It has been both my most terrifying and most rewarding performance so far.”

Those adjectives make more sense together than meets the eye, and the way they describe Abbey’s breakout at Joffrey symbolize her first year out of North Carolina.

An MCS student from age five through her eighth year, and the eldest of five siblings to attend the school, Abbey moved to Illinois for what otherwise would have been her senior year of high school much closer to home

She has settled into an apartment where, as of this academic year, she is savoring her own kind of college experience. One where residential life lacks R.A. supervision but comes with an in-house kitchen, and where the curriculum focuses completely on a student’s chosen major.

Her immersion in ballet comes as no surprise to the holdovers from Abbey’s time at MCS.

Located on Pope Road, along the Durham-Chapel Hill town border, MCS is open to students as young as 18 months and as old as 14 years. Aggregate enrollment tends to hover around 250, with all students working with one or two additional grade levels besides their own. They are granted ample independence and directed toward appropriate materials and means of building on their interests.

Even before she enrolled, as young as age three, Abbey had her passion and career path expressly set.

“It has never waned,” she said. “I have never considered pursuing anything but ballet.”

While a more traditional college education is still on the table, the Montessori method nurtured Abbey’s desire and ability to break into a selective society whose website proudly proclaims it “America’s Company of Firsts.” Founded in 1956, Joffrey was the country’s first dance troupe to earn an invitation to the White House and to be covered by mainstream magazines, television, Hollywood and YouTube.

With that precedent for pushing boundaries, Joffrey is a natural dream destination for young aspiring ballerinas. But before getting there, let alone narrowing her academic focus, Abbey learned “to see the reward that comes with pushing beyond limits.”

That is her summation of studying literature with Judy Martel during her final year in the Upper El program. “With her guidance, I wrote an in-depth paper on Ernest Hemingway that I think I could have turned in at a high school level.”

In the summer, Don Henchel’s drama camps kept Abbey close to MCS and emboldened her confidence on stage.

“His passion for teaching guided each lesson,” she said, “and this also served to encourage me to echo that passion.”

Abbey capped her time at MCS on a high note. As an eighth-year student, she took part in the Adolescent Community’s production of Shakespeare in Hollywood. Although the show focused on skills other than dance, it left her with lasting intangibles, which is why she singles it out as her best extracurricular highlight at the school.

“It was a deep dive into the art of character development and artistic expression,” she explained, “and this experience has been invaluable to me in every dance performance that has followed.”

Upon graduating, Abbey moved an hour-and-a-half west to Winston-Salem, where she was selected for the class of 2018 at the University of North Carolina School of the Arts high-school program. Her 120 classmates combined to represent 12 states and four countries, and have matriculated to 77 different colleges.

But Abbey is taking an alternate route for the time being. In lieu of an old-fashioned fourth year at UNCSA, she pounced when Joffrey offered her a spot in its conservatory program. She was one of 20 candidates accepted to the company’s new division, which fosters a 14-to-18 age group, for its inaugural year in 2017-18.

While logging five-and-a-half hours of dance training every weekday in Chicago, she completed her high-school credit online, completing a course in AP Literature.

For 2018-19, Abbey will upgrade from Joffrey’s pre-professional division to professional trainee status. A spring production of the comedy Coppélia gets extra markings on her calendar for the coming year.

“I have never learned the repertoire from Coppélia,” she said, “and I adore the process of learning and gaining insight into the intricacies of a new ballet. And I am always happy to expand my knowledge of the iconic classical ballets.”