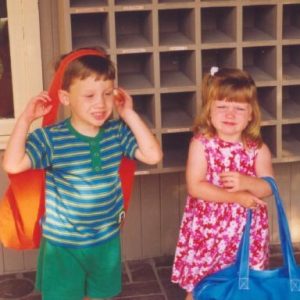 Every working day since Abigail Lutz ’09 graduated from Cedar Ridge High School in Hillsborough has been another day by her special definition of the phrase. That goes all the more for each day following her 2017 commencement at North Carolina State University.

Tomorrow promises to be the same, and she has booked a similar agenda for all of the foreseeable future. As a first-year Upper Elementary teacher at the Montessori School of Winston-Salem, she carries on a chronicle she could not have resumed soon enough.

Upon exhausting her eligibility as a student at the Montessori Community School in Durham, where she had started her education at age three, she transitioned to a setting that, to its credit, solidified her vocational goals.

“The idea of being a teacher was something I had thought about before high school,” she said. “But the contrast between my educational experiences in my first 11 years of school at MCS and my time at Cedar Ridge led me to want to learn more about the theories behind different educational methods and reinforced my interest in becoming a teacher.”

In her first semester at Cedar Ridge, Lutz answered an English class essay question to that effect. Prompted to assess her intended career, she zeroed in on the prerequisites to becoming a Montessori guide. Through that scope, she researched the top pathways and encountered the Washington Montessori Institute (WMI).

WMI, which operates in conjunction with Loyola University in Baltimore, is the oldest school of education with an Association Montessori Internationale (AMI) accreditation. Founded in 1962, WMI began offering both an AMI diploma and master’s in education as part of a single program in 1991. Michelle Reader, a current MCS Lower Elementary teacher whose previous work at the Upper Elementary level coincided with Lutz’s sixth-grade year, garnered her master’s there in 2000. 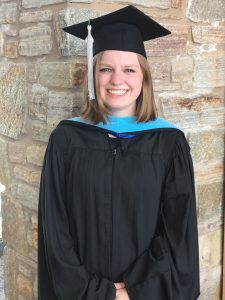 Learning the finer points on WMI and its long-term full-circle implications for her, Lutz was sold.

“At 14, I had set my sights on attending that program and becoming at Montessori guide,” she said.

But that would need to follow a broader study of education in college, to say nothing of high school’s more generalized syllabus. The enticing pinnacle in Lutz’s education was, in the oft-repeated words of the late Lynn Kruger, “a story for another day.”

Kruger, a former Upper Elementary teacher at MCS, passed away in May 2005, late in Lutz’s fourth-grade year. Lutz did not have Kruger as an official teacher on a daily basis but still absorbed a crucial career lesson from her during the 2004-05 school year.

“While she was battling cancer, she would come into the Upper Elementary class to tell history stories,” Lutz recalled. “Her stories were always full of passion and excitement. She always ended her stories leaving me wanting to know more, often ending her stories with a cliffhanger by saying ‘…but that’s a story for another day.’”

Years later, she added, “In my training, I learned how stories are used in the Montessori elementary classroom to spark the child’s imagination and inspire them into work.”

More than 12 years after her passing, Kruger’s spirit flexed its strength all the more when Lutz enrolled at WMI and worked under AMI auxiliary trainer Jamie Rue. She too would close her anecdotes with the promise, “that’s a story for another day.”

“Every time she said that,” Lutz said, “it reminded me of Lynn and the happy memories of her stories. In my teaching, I try to bring that same passion and excitement to the stories I tell in hopes of inspiring my students the same way she inspired me.”

Sameness made a crucial motif in molding Lutz’s path to the Winston-Salem area, where the school in neighboring Clemmons answers to the acronym TMS. When she worked toward her bachelor’s in elementary education at NCSU, her syllabus was STEM-oriented and immersed in a philosophy and atmosphere decidedly different from what she considered the more enriching Montessori Method.

“During my time there I had my first experience of traditional elementary education,” she said. “All of these classroom experiences reemphasized my desire to return to Montessori education.”

When she applied to WMI, as part of her required personal statement, Lutz noted the refreshing return to her roots when she spent her senior placement with pre-K and kindergarten students at a Montessori magnet school.

“The environment in the Montessori elementary classrooms I attended played a huge role in the development of my mindset about learning and the joy I have always found from it,” she wrote. “I want to pursue Montessori teacher training to allow myself to extend these opportunities to more children. I want to guide my students in their learning in a manner that allows them to experience that same joy and satisfaction. I believe that my personal outlook on learning and education makes me suitable to work as a Montessori teacher. My views of education have been built with a foundation in my own Montessori education and my desire for all children to develop a love of learning.” 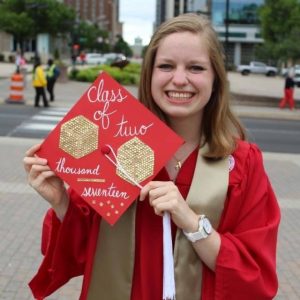 WMI was sold, admitting Lutz to their one-year program for 2017-18. In between, she made a statement at her NCSU graduation by adorning her red cap with Montessori golden beads.

As an extra reward for her next step, Lutz returned to Durham for two weeks in the fall of 2017, conducting one of her 10-day observations at MCS. Sitting in on Room 302, she was reunited with Reader and Jen Tobolski, whose tenure here also overlapped with Lutz’s days as a Mustang.

Of her homecoming, Lutz said, “This was wonderful because it allowed me to look at and reflect on my own experience at MCS through the lens of my training and the new pedagogical knowledge.”

As a whole, and as temporary training grounds, the peerlessly familiar Pope Road campus served as the early spoonful ahead of the scoop Lutz craved for her first job out of Loyola. Besides following a Montessori curriculum, she wanted to move back to North Carolina. Moreover, with a specialty in guiding an Upper Elementary class, she wanted her students to have an adolescent program to prepare for and look forward to.

MCS expanded its age range to seventh and eighth grade late in Lutz’s own time as a student, making her one of Room 603’s first beneficiaries.

As it happens, her arrival at TMS coincides with the first year of the Montessori Adolescent Program in Winston-Salem. TMS has retained its first group of seventh-grade students for 2018-19 and will keep them around as its inaugural eighth-and-ninth-grade classes.

For Lutz, this means seeing the same anticipation in dozens of faces as she once felt within herself. It means starting and continuing dozens of more Montessori stories that, for her sixth-year pupils, may pause come summer but will be valid for continuation another day. 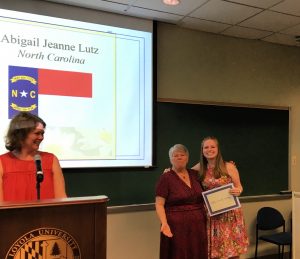 “It is important to me to know that,” she said, “as I watch these children transition out of the second plane of development and into adolescence, that they have the opportunity to continue growing and learning in an environment specifically developed to support them based on the characteristics and needs of this phase of life.”

Secure in that knowledge for her students, Lutz can freely admit to reaping instant personal gratification as well. After nine years spent predominantly in other settings, six months’ worth of another day in her formative paradise has begotten ample desire and material for more ahead.

“I am learning new things every day,” she said. “I learn from the children and am able to better my teaching and myself. The children inspire me to research and learn new things for lessons and stories.

“In that way, being back in a Montessori elementary environment has been very similar to my time there as a student. I am constantly learning new things and being inspired by the work others are doing around me.”