Elizabeth Burch-Hudson: MCS ‘The Kind of School You Bring Home to Your Parents’ 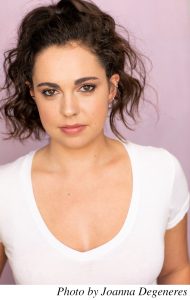 Through its tagline, Elizabeth Burch-Hudson’s award-winning short film, A Service to My Gender, poses a basic but deep question.

“Can you trust someone you’ve only just met?”

Though implicitly rhetorical and cautionary in the context of the story, the question can draw either answer in other scenarios. Burch-Hudson knows this based on everything she has built at each stage of her young life.

That all started early during a relatively short stop along the Durham-Chapel Hill town border. When she was barely old enough to remember anything, Burch-Hudson joined her family in moving from Southern California to the Research Triangle. Before long, she and her older sister, Katy Blake, were enrolled at the Montessori Community School.

Before too much longer than that, the Burch-Hudsons were uprooting again, starting anew in Missouri for what proved to be the balance of each sister’s upbringing. The bittersweet flavor of that move did not sit light on the impressionable six-year-old Elizabeth’s palate. There were plenty of memories to treasure from the Pope Road campus as it was, but also much to regret missing out on going forward.

Of her departure from MCS, 16 years after the fact, Burch-Hudson says, “I think that was one of my first young exposures to heartbreak; being forced to leave those friendships when I moved from North Carolina and MCS shortly after making them.

“But those friendships were true, stimulating and based on both equality and adventure.”

Those principles were readily apparent when Burch-Hudson enrolled in the Primary program. She found teachers who trusted each student’s instinct for learning. She found the freedom to seek lessons out of every new occurrence and from all people in her life, regardless of age or experience.

At times, the general trust she cemented and her enthusiasm for sharing informative adventures with her peers pushed some boundaries. On one occasion late in her quality-over-quantity MCS stint, she wandered off with a classmate in an honest mistake. 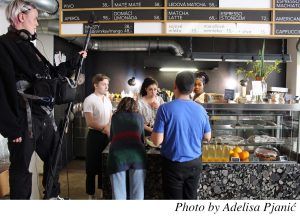 The two, she explained, merely meant to seek extracurricular hands-on learning in “the hidden worlds of her vast suburban neighborhood.” Upon their return, they learned an unexpected safety lesson that sank in as soon as they saw members of every nearby household searching for them.

“We were in trouble,” Burch-Hudson admits, “but to us, it was worth it.”

Roughly a decade later, deep into her decorated run at the Columbia Independent School in Missouri, Burch-Hudson started capitalizing on more permissible ventures far from home. During the 2013-14 academic year, as a senior, she represented CIS in its student-exchange program with the Cheadle Hulme School in Stockport, England. That volunteer upheaval did not slow her down, let alone stop her from serving as “president of the choir at one (school) and the supporting lead in a play at the other.”

After following her sister’s footsteps to the University of Southern California in their native Los Angeles, she built on her overseas resume and penchant for film studies with a stint at the Universidad Carlos III de Madrid in 2017.

Burch-Hudson initially pursued a theatre degree at USC, then switched her concentration to filmmaking as a sophomore.

“I have always loved writing,” she explained, “and the allure of the autonomy that directing and writing content for yourself as a young actress could not be more enticing.” 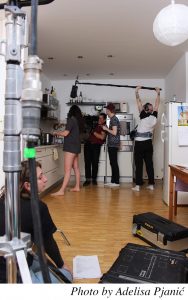 Besides that craving for creative independence, she can trace her interest in performing back to MCS. As short as her time there was, especially compared to her later stretches at CIS and USC, she stayed long enough for what she considers her performing-arts breakout. At age six, she held two roles as a townsperson and a bumblebee in a production of Hiawatha.

“A school that supports the arts is a gem and a rarity to begin with,” she said. “But a school that puts on a yearly opera that includes all students and faculty is the kind of school you bring home to your parents.”

But now another creative inlet for writing, directing and performing was in order. So was another protracted international excursion.

For 2018-19, she sought another arts-supporting school, one that would (yet again) pull her more than an ocean’s length away from her parents. Although, with her prior experience in Great Britain and Spain, she had “always found a home away from home in Europe.”

A USC screenwriting professor and friend of Burch-Hudson’s mother — the accomplished, multifaceted storyteller Milbre Burch — pointed her to the Prague Film School. Burch-Hudson finished applying to one yearlong program there and was accepted before she could finish applying to others.

The narrative filmmaking alumni of PFS have gone on to earn hardware at such prestigious award shows as the Emmys, the Sundance Film Festival and the Cannes Film Festival. The only catch for the program’s successful applicants is that the unconditional window to confirm their enrollment is one week. 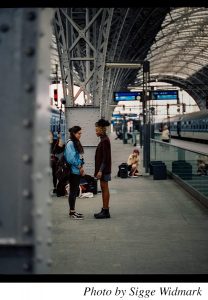 “So I took a leap of faith in a program that would not fulfill any academic accreditation, but would hopefully prepare me for a future on set,” Burch-Hudson said.

Per the syllabus, for her first of two 15-week semesters at Prague, Burch-Hudson wrote, directed and edited four projects. One of them, A Service to My Gender, was released on December 20 and joined 2017’s Delivery among her credits on the authoritative Internet Movie Database.

The five-minute, 22-second story would also win the title of best microfilm at the 2019 Independent Short Awards. But Burch-Hudson has had little time to rest on her laurels — which also include the PFS best screenwriting award — through the second semester, which concluded in late May, to say nothing of what’s next.

Burch-Hudson came back stateside shortly after Memorial Day, and is itching to “get back on set as soon as possible.”

Of her year in the Czech Republic, she said, “It was difficult, but it was the happiest I have been so far in my 22-year-old existence because I was doing what I loved. Now the goal is just to do that and get paid for it.”

In a way, her activities at PFS are not finished. As she continues to dabble in writing and directing, she plans to expand upon the screenplays she started as part of her coursework. If all goes according to her plan, “one day you will be seeing my name at your local AMC marquee.” 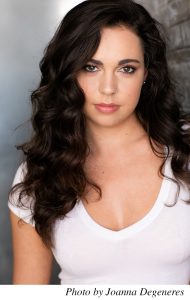 That is not ego-speak by any stretch. Burch-Hudson is mindful of the possible necessity of professional baby steps and is not ruling out graduate school (maybe even emulating her mother toward a doctorate).

If she reaches her ultimate goal, her achievements will simply be the exception to a norm of unseen accomplishments by the MCS Primary and Lower Elementary classes of the early 2000s.

While she has lost regular contact with her earliest schoolmates, she trusts that “they are doing great things.” Meanwhile, all of the Burch-Hudsons continue to talk “fondly” about former MCS teachers Peter Piche and Karen Richardson.

“Though it was years ago,” Elizabeth said, “attending the Montessori Community School remains one of my fondest memories during my path to higher education. Aptly named, the community was incredibly supportive and collaborative. At six years old, I never felt belittled or patronized, but like an equal amongst both my peers and teachers.”