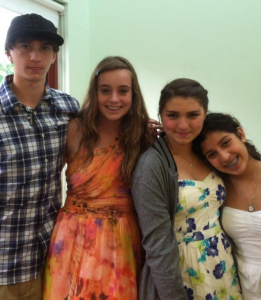 Lucia Craige ’12 was at the Montessori Community School for two years, enrolling in and graduating from the Adolescent Community. Yet so much has stuck with her since that relatively short chapter in her education.

To match that deceptive narrowness, one can zero in on her lasting pursuit of “hands-on learning.” That, and her self-described “hunger for trying new things and learning in new ways that excite and intimidate.”

Since leaving Pope Road, she has channeled the latter and lived the former in a return trip to her native Guatemala with her adoptive family. That journey at age 15, when she witnessed the effects of poverty and malnutrition on underserved communities, furthered her interest in public health. The subject is now one of her majors at Elon University.

And through Spanish, the other half her double-major, she had more hands-on learning in an experimental program that cannot help evoking Montessori-like ideals.

As part of her two-year appointment as Elon’s Center for Engaged Learning (CEL) Scholar, Dr. Ketevan Kupatedze, a senior lecturer in Spanish, is focusing on student-faculty partnerships. To lift that off the ground, throughout the spring 2018 semester, she enlisted selected students, one per session, to collaboratively craft a course’s syllabus for future consideration.

As a veteran student of Kupatedze, Craige got the call to design an advanced class, “Socio-political Conflicts in the Spanish-speaking World.” On a weekly or biweekly basis, the pupil and the professor ruminated over a virtually unlimited variety of media each party had brought to the table.

“So long as it related to the focus of the material and also had scholarly validity to it,” Craige said, explaining the conditions. “Beyond that, I was free to compile any type of research.”

That research ranged from news clippings to scholarly reports to all forms of art, including paintings, music and film. With that variety, she was now second-naturedly applying one of her MCS takeaways. Studying here had left her with a “love and curiosity of learning and completing new material in new ways.”

“If I became frustrated with a paper or project because I did not understand the material or what to do next,” she continued. “I was guided to look at it from different perspectives or use a different medium for visualizing or conceptualizing the material.

“Now that I go to Elon, I still use this method when I learn difficult material in ways that I can visualize better or even connect to other information that offers a new perspective.”

Through her role in co-designing “Socio-political Conflicts in the Spanish-speaking World,” Craige all but left no prospective perspectives unturned. While the extensive preparation for a potential course she was not even taking meant piling more atop a weekly workload that covers a double-major plus a minor in religious studies and any outstanding core requirements, the labor had a lenient feel to it.

“I did not think of this as a job or a heavy responsibility,” said Craige, “as it all related to information I was interested in and was excited to share with Ketevan and her future students.”

There again is that Montessori habit of being on a first-name basis with one’s teacher. If Craige needed a refresher on that custom going into her partnership with Kupatedze, a core pillar of the project did its work.

Kupatedze and her collaborators on each course later recounted their experience through blog posts on the CEL’s website. Explaining the premise of her experiment, Kupatedze wrote that she wanted a direct example of students’ primacies in selecting a class. The best way to achieve that was to have a student-body representative speak directly and bring their perspective to her office. 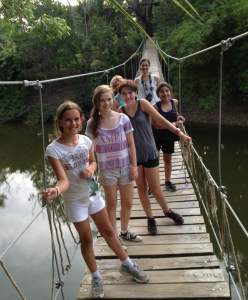 “Students are very used to occupying a passive role in their relationships with faculty,” she wrote. “They are often unwilling and/or apprehensive of actively engaging in a dialogue with faculty because they are taught to accept and work with very hierarchical relationships in the academia.”

When reached by MCS Communications, Kupatedze elaborated, “one of the student-faculty partnership’s most significant outcomes is that it develops reciprocal responsibility for the process of teaching and learning; one in which both students and teachers are equally — although not in the same way or for the same things — responsible for teaching and learning.”

Kupatedze admitted she was unaware of Craige’s history as a Montessori student. She did, however, see her potential as a partner when teaching her during the winter term of 2017-18.

“I thought of her as already an engaged student who would benefit from this type of experience, as well as (one who) would have a lot to contribute to it.”

As she recounted in her reflective blog post, though, she had also seen some reservation in Craige during class discussions. While this was nothing new, Craige had learned how to break out during her days in the Adolescent Community. To that point, late in her first MCS school year, she stated in the 2010-11 yearbook that her favorite aspect of the school was “how welcoming the community is. Even when you just arrived at this school!”

Of MCS and its renewed influence on her unique Elon project, Craige offered, “These experiences have inspired me to take on projects and new tasks that may involve working with new people or new material that I might be a little apprehensive about.

“While I felt this way about the student-faculty partnership, it was mainly because I did not have previous experience with that type of work and was nervous about leading it with Ketevan. Once I became acquainted with the material and project, my excitement overcame any apprehension.”

Through their one-on-one work designing a future course for other students, Kupatedze hoped to bring Craige further out of her shell.

“I wanted to offer her an opportunity to share her thoughts more freely and perhaps acquire a better sense of pride,” she wrote on the CEL’s website.

When asked if the two had met that objective, Craige confirmed as much.

“The ability to present my ideas and research to Ketevan gave me a sense of higher responsibility that I was excited to undertake,” she said. “It was important to me to do a good job in all my research and understanding of the material to make it better for the students.

“I have applied this in my junior year, knowing what I am capable of and planning how to achieve my goals.”