Helping Others Has Pirated Amaresh’s Heart 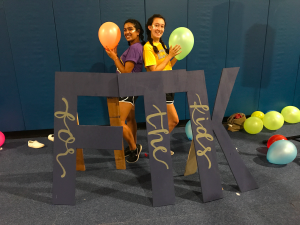 Sneha Amaresh ’13 might hesitate to dance in front of acquaintances. With that said, when you want to coax her, it helps to let her know when a meaningful stake is in it for others.

And so here she is, a sophomore at East Carolina University in Greenville, carrying the torch for Piratethon.

ECU’s upstart division of the Children’s Miracle Network Dance Marathon, which boasts more than 400 college chapters, Piratethon was on the rise just in time for Amaresh’s arrival last year. Raised in what she dubs “a family of doctors” that also instilled a deep interest in classical Indian dance (specifically Bharatanatyam), she brought a fitting background to the club.

All that was missing, at first, was convincing.

“I was dragged along,” she said in reference to her first meeting.

But then she learned more about the logistics and charitable connection. Per the Miracle Network’s website, each campus Dance Marathon pursues a year’s worth of team building and fundraising toward the title event. Marathons tend to vary from eight to 40 hours, with patients and families from the nearest Children’s Miracle Network hospital on hand.

“When I learned more about it, I attended as many meetings as I could,” Amaresh said. “And when the previous president decided that my friend Tara (Martin) and I were the most responsible members to carry on Piratethon and get it rolling, we accepted.”

Together with her co-president Martin, Amaresh is gearing up for an April extravaganza benefitting Vidant’s Children’s Hospital. They are shooting for a party between six and 10 hours in length, and are expressly less concerned with performance quality on the floor than with maximizing participation and funds.

“It is a lot of scheduling and phone conferences and meetings and stress,” Amaresh said. “But it’s been amazing, and I see so much potential for it.”

Spearheading Piratethon is an extension of Amaresh’s longstanding commitment to community service. Her cosmopolitan upbringing touched nearly every base around home, wherever that happened to be at a given point.

Born in Michigan, where her father completed his medical residency in her mother’s adoptive hometown of Flint, Amaresh subsequently lived in Ohio. The family of five relocated to Durham when she was six. They have since moved to Cary, but are still a constant presence at a host of community initiatives.

In a short list of their services, a feature on the family published in Cary Park Magazine mentions that they “Participate in highway clean-ups, 5K Charity runs, volunteer at food banks & soup kitchens, teach yoga in the library and schools, and work in free medical clinics.”

Besides utilizing her father’s expertise, the last of those projects especially emboldened Amaresh’s early ambitions to pursue the Peace Corps. But she was not going to wait too long to venture overseas.

By middle school, she was ready to try living in her parents’ native country, and enrolled at the Chinmaya International Residential School in Coimbatore, India, for two years. Late in that second year, though, she tapped into Durham’s independent school scene and built on her previous stint at an Ohio Montessori school.

While only eligible to attend the Montessori Community School, located on the Chapel Hill town border, for two 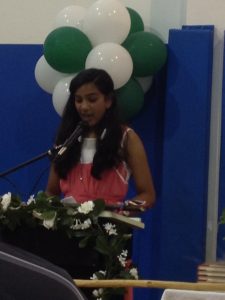 months plus one full academic year, Amaresh had a life-changing class trip within that time.

“Through MCS,” she said, “my eighth-grade class visited Roatan, Honduras, where we were able to interact with children on the island and provide them with some resources we brought. This interaction helped me realize my passion for helping children, and reinforced my desire to join the Peace Corps.”

Among her memories back on campus, Amaresh was quick to single out MCS’s biannual Garden Day.

“It was a lot of fun to work outdoors with my friends on a project that benefited the school as a whole,” she said.

Beyond that, her all-round pick-ups within her relatively short stint on Pope Road rival her family’s service excursions in vastness and variety.

“MCS prepared me for more practical parts of my life than high school,” said the eventual honors graduate of Panther Creek High School in Cary. “And for things I never would have learned on my own, but I am so grateful I did.

“I learned about stocks, how to pitch a tent out of two tarps, how to scuba dive, how to play the ukulele, how to play a villain in a play, how to make art out of rubber carving blocks, how to play volleyball, how to live a more mindful life and most importantly how to enjoy learning.”

The last of those residual takeaways has since translated to a compounded academic focus at ECU. Amaresh has long had her eyes on a major in public health, and her prime focus is currently psychology, but she has added a minor in anthropology.

With that much on her plate, few might benefit from an energizing dance diversion more than her when the opportunity comes this spring. The question is whether she will step up and lead on that front after the funds are tallied and the effort is all over but the celebration.

If another pattern from her MCS days holds up, the odds are favorable.

I was relatively shy about dancing solo in front of many people that I know,” Amaresh recalls. “However, I did occasionally invite my MCS friends to watch me perform with my dance group for shows.”