MCS Students to Participate in JUST TRYAN IT 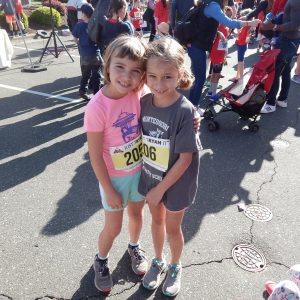 Update: All four Team MCS participants completed the 2019 Just TRYAN It triathlon within 38 minutes or fewer. Patrick Soher finished third in the male age group of 11 and 12, clocking in at 24 minutes and 50 seconds.

Donuts are one easy way to get almost anyone, let alone an elementary-age school student, up and running early on a Sunday. For a quartet of Montessori Community School students, though, those are the admitted mission-accomplished fun part after a morning of running, biking and swimming.

“You get healthy food at the beginning – anyone can get the healthy food,” explains Larklin Andrews, one of the school’s veteran representatives at the JUST TRYAN IT triathlon, which returns to Chapel Hill on May 19.

“And then at the end the racers get donuts or lollipops.”

The edible dough at the finish line, however, pales in comparison to the universally expressed motivation. Andrews, Cori Artabane, Emlyn Soher and Patrick Soher are all back to raise more money for the JUST TRYAN IT Family Assistance Fund. Proceeds go to local hospitals, alleviating treatment-related and everyday expenses for the families of pediatric cancer patients.

“For the people who can’t afford the cancer treatment,” says Patrick Soher, “I feel like they deserve to get the medicine.”

JUST TRYAN IT, which also has chapters in Maryland, Massachusetts and Virginia, is in its 10th year of operation. Its grand annual event in each locale is open to racers between the ages of six and 14, and the Chapel Hill version offers three levels to choose from.

MCS entered its first team of triathlon participants in 2017, at the behest of parent Niha Wunnava. With Andrews, Artabane, the Sohers and seven other Mustangs taking part, the school exceeded $3,000. 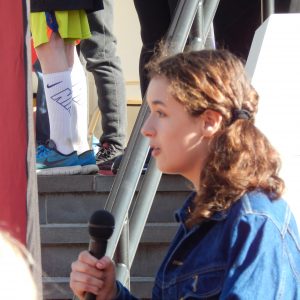 Last year, the school amplified its presence, with students performing the national anthem as part of the race’s opening ceremonies. The two local beneficiaries, Duke Children’s and UNC Children’s Hospital, went on to combine for $99,832.83 raised in the charity’s 2018 year-end impact report. With $2,482 in funds in its team’s name, MCS alone was responsible for nearly 2.5 percent of that total for the Chapel Hill chapter.

One of 21 teams returning to the Chapel Hill Country Club this weekend, MCS intends to break the $3,000 plateau once more. Amidst their physical preparation, which for some is as easy as biking to school or joining a local swim club, the four veteran racers have joined one other team member in procuring donations.

Contributing in that fashion, Artabane noted, “gives people a chance to participate in the race and do stuff if they don’t like swimming, biking and running.”

The 2019 Chapel Hill edition of JUST TRYAN IT begins at 8 a.m. this Sunday, with opening ceremonies preceding the triathlon by a half-hour. Those still wishing to contribute to Team MCS may do so through the event’s website.