The Child Creates the Adult 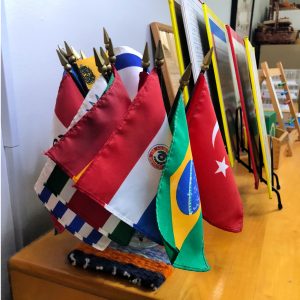 A central idea in Montessori education is that “the child creates the adult” – that is, that the child, through her/his work, is creating the adult that s/he will become. Since shortly after I began my Montessori training, having previously worked with children and teenagers in other capacities, I reflected that our role as adults in a child’s development is a much more humble one than we usually believe. The child, through her/his own activity, is creating herself/himself. Our role as adults is more often to support, guide, help, assist, encourage – to “teach” some of the time, yes, but not constantly.

What support do children need? A cornerstone of Montessori practice is the prepared environment. We provide a rich environment, full of interesting, consciously created learning materials; bright, open spaces that allow for freedom of movement; clear norms and expectations that facilitate respect and order while allowing for the freedom of the child within them; and kind and respectful adults who are prepared to assist the child with the tasks that will facilitate her/his intellectual, social, emotional, physical, and spiritual growth.

Another important aspect of a Montessori environment is the opportunity for the child to participate in spontaneous activity. On my first visit to a Montessori classroom (the event that prompted me to become a Montessori teacher), I witnessed a group of first through third graders engaged in meaningful work (an older student was skip counting by nines to 729, the cube of nine; a first grader was learning the flags of the countries of the world, because he had already memorized the names of the countries; a pair of girls went to a quiet corner and resolved a disagreement using a “peace rose.”)  I was amazed that these students were so engaged in such diverse work, while the teacher had time to talk to me, show me materials, and explain what some of the children were doing.

Maria Montessori believed that each individual constructs herself/himself.  She stated: 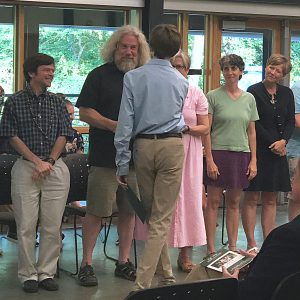 Last week, I spoke to an MCS parent in front of the school, as she was waiting to pick up her son. I asked her what her son’s plans were for next year. It turned out that he has been engaged in applying to high schools. This mom said that she offers support, but that he is in charge of the process. He is the one who is filling out the applications. I knew that her older son, as an MCS 8th grader, had applied to, gotten accepted, and was now enrolled in an out-of-state boarding school. His mother told me a little more of the story, including how surprised the admissions staff were to realize that the e-mails they were receiving were being written, not by a parent, but by the student himself.

The parent of the two of these boys then said that MCS had prepared her sons for this. She commented, “planning a trip to and navigating around our nation’s capital [as both of these students did in 6th grade, as part of their Senior Explorations project at MCS] was much more challenging than applying to and getting accepted to private school.”

That story seemed like a testament to the level of independence, of self-sufficiency and “self-construction,” per Montessori, that these two boys had achieved by 8th grade.  Here’s another Montessori quote that I think speaks to this, and with which I’ll close:

My vision of the future is… of individuals passing from one stage of independence to a higher, by means of their own activity, through their own effort of will, which constitutes the inner evolution of the individual.