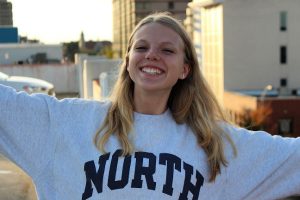 Emojis enlivened Alana Fiordalisi’s introduction to what could be the basis for her career.

Currently a sophomore and computer-science major at the University of North Carolina, Fiordalisi knew nothing of binary code until she was in the adolescent age group at the Montessori Community School.

By the time she graduated from the Durham institution in 2013, a unique lesson had ingrained the fundamentals in her mind.

“Instead of using ones and zeroes, we used fun symbols, like Christmas trees and ornaments or smiley faces and suns,” she recalled. “I never forgot how to count in binary (and I was always very enthusiastic to teach it to people), and it ended up being incredibly relevant to my college experience.”

Fiordalisi admits the subject did not spark her as much as others had in her MCS days. That continued through her four years at Jordan High School, where she was the 2017 salutatorian.

Around the time of graduation, though, she struck up a chat with a former Jordan acquaintance at a mutual friend’s birthday party. The other conversant, whom she would follow to UNC, pitched the university’s Intro to Programming course.

Both students had especially appreciated their high-school calculus course, and Fiordalisi was told this would be a good fit on those grounds.

“I nodded along politely and considered the option,” she recalled. “A month later, I ended up signing up for the class, but I was still convinced that I would be miserable in it.”

Fast-forward to the fall, where she tried it and liked it. 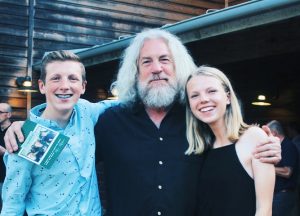 “I came to realize that COMP110 was the class that I was most excited to work on in the evenings,” she said. “I loved going to office hours and working with the undergraduate teaching assistants (UTAs) on my assignments.”

So much so that she wasted little time emulating those UTAs. At her first chance last spring, she became one herself while declaring her major. In her position, Fiordalisi works with roughly 60 fellow students to impart comprehensive peer aid to those breaking into the computer-science program.

The way Fiordalisi evolved from an apprehensive novice to an avid leading learner in that field would be familiar to her former teachers at MCS. When reflecting on her earlier education on the other side of the Chapel Hill town limit, she thought back to a crucial pick-me-up she received at the school’s annual Adolescent Science Expo.

“I was trying to study something about how plants would grow,” she recalled, “and my plants just didn’t grow, leaving me with surprising but inconclusive data. I was rather distraught. Since this was such a large project, I couldn’t believe that it just didn’t work.”

Fiordalisi broke off from her classmates in an attempt to compose herself. That was when Michele Widd, one of the three Adolescent Community teachers at the time, stepped up.

“During our conversation, Michele said something along the lines of how I was in some way stubborn or persistent when it came to my work, in the sense that I wouldn’t give up or let go of anything that I started.

“To be fair, I don’t think this was necessarily intended as a compliment at the time. But I have reflected on this many times in the six years since then.

“I ended up presenting and writing about my failed experiment while redoing the tests on my own time, which was humbling and also representative of how science works.”

As a whole, that eighth-year rollercoaster did not define Fiordalisi’s protracted stay at MCS. There were plenty of through-and-through cheerful days from her admission into the primary program through her graduation. 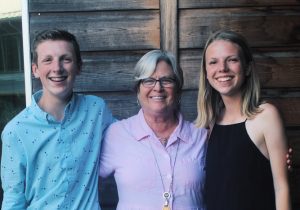 ong the constants after every move from one level to the next was the easy access to nature around campus, which fed Fiordalisi’s passion for sustainability. She has since made that topic her minor at UNC. In between, she spent three weeks of the summer of 2015 at a rigorous sustainable urbanization program in New York City.

The hands-on curriculum at that camp, hosted by Columbia University, involved studying the Hudson River up close and conceiving a green-friendly pier that could be built by its side.

For Fiordalisi, undertaking that much away from home while she was still halfway through high school was another way of building on her MCS foundation.

“I learned how to be an independent child and student, and the importance of this is still being realized,” she said. “I think about the impact of the follow-the-child philosophy all the time. This independence is vital in college, where you are in control of everything you do, from selecting classes to completing classwork to setting your daily schedule.

“Beyond the practical, day-to-day need for independence, I feel that I am also more comfortable than some of my peers in paving my own path.”

That path, she admits, is still tentative. Beyond her major and minor, she continues to pursue other longtime and newfound passions at UNC as an admissions ambassador (typically giving one campus tour per week) and as a student assistant at the Morehead Planetarium.

But for now, at the very least, all roads cannot help but lead back to Pope Road. Fiordalisi’s brother, Alex, graduated from MCS this past spring, and her continued proximity allowed her to pick him up most afternoons.

With Alex’s own ceremony this past June, Alana was especially enthralled to catch with Sue Ferrari and Don Henchel — “the two teachers who defined my primary and lower-el experiences, respectively” — among other holdovers. 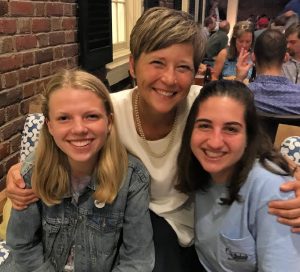 Even with her bloodline no longer enrolled, she takes every opportunity for a mini-MCS reunion. Mikayla Sortisio, her fellow former Mustang, Jordan classmate and current Tar Heel will occasionally join her and MCS teacher Melanie Leyden at the Ye Olde Waffle Shop or the Front Porch at the Carolina Inn.

Now one semester away from the halfway mark of her college years, she had her eye on another summer beyond the Research Triangle. She will intern in software development at the SentryOne company’s Charlotte office.

“Though I haven’t yet worked for a tech company,” she said, “my impression is that they have a culture that is reminiscent of the culture at MCS. For the most part, these companies have open office designs where you can walk around and talk to people and see what everyone is working on.

“You meet with your smaller team every day but hear about what everyone in the project is working on. Communication with coworkers and project managers is vital.”