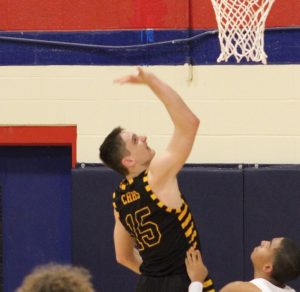 You might say Drew Gilleskie’s years at the Montessori Community School were the starting five on his basketball career.

Entering as a second-year Lower Elementary student in 2008 and staying through the end of Upper Elementary in 2013, the soon-to-be freshman on the William Peace University men’s roster made his ambitions plain through actions and statements alike.

In the 2010-11 yearbook, at age 10, Gilleskie said his favorite thing about MCS was “playing with my friends at recess.” The following year, he was quoted as saying, “I want to be in the NBA.”

And in 2012-13, when the yearbook asked him how he had changed or grown in that academic cycle, Gilleskie replied, “I’ve become more willing to practice basketball.”

By the time he joined the Chapel Hill High School Tigers, his dedication to the sport showed through his year-round involvement and achievements. Besides his interscholastic team, Gilleskie took part in selective AAU programs, such as the 17-and-under Team Stacked.

While he has tempered his professional aspirations — he will study criminal justice at WPU, and intends to enter that field as a sheriff’s deputy — Gilleskie has capitalized on his connections in a community that insatiably hankers for hoops and has the otherworldly caliber to match the passion.

Copeland, who won a national title with the Tar Heels in 2009, is now a substitute teacher and basketball and track and field coach. Thomas, a member of UNC’s 2005 NCAA championship team, later became a recording artist in his native Oakland.

Williams, who graduated after the 2005 title, remains a professional hoops journeyman. He briefly played for the NBA’s Cleveland Cavaliers (opposite LeBron James) and is currently with Alvark Tokyo in the Japanese League. 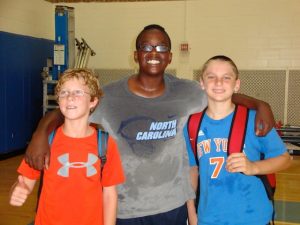 “My experiences with the UNC players began with Mike,” Gilleskie said. “We saw him at Sutton’s Drug Store in Chapel Hill and started a conversation, which led to him training me for years. He and Quentin Thomas worked together, so I met ‘Q’ through Mike.

“Jawad was recommended to us by one of my mom’s colleagues, who was the wife of a player who played with Jawad.

“They really helped me take my game to a new level in the years I worked out with them, and I give them a ton of credit for getting me here today.”

This past winter, Gilleskie cemented his profile on the hardwood. Shortly after Christmas, he was Chapel Hill’s lone representative on the all-tournament team at the competitive South Granville Holiday Invitational.

A month later, in a 76-69 loss to a Hillside squad that would finish the season with 28 wins in 30 games, Gilleskie scored 23 (or one-third) of the underdog Tigers’ points. On February 8, he matched that single-game point total and collected 20 rebounds in a 66-65 double-overtime loss to Orange.

“I knew I had a lot of rebounds (that night),” he recalled, “but it really hit me when I was told after the game that I had done that.”

Amidst his slew of statement games, Gilleskie was being courted by six programs around North Carolina and Virginia, ranging between Division II and Division III. Averett University, Catawba College, Greensboro College, Guilford College, and the University of Lynchburg were the also-rans behind WPU.

“The most challenging aspect of the recruiting process came at the end,” he said, referring to test runs he made by playing pickup games with each team. (That was a bit of an upgrade from his Upper Elementary pick-up contests on the MCS sport court, though he says those got sufficiently competitive.)

“It came down to Greensboro and William Peace. Peace felt right while I was playing and I loved the team, so I picked them.”

Incidentally, the Raleigh-based WPU was Gilleskie’s only suitor in the Research Triangle. By choosing Peace, he is furthering his own words about a lasting circle of Pope Road pals.

“My friends were an important part of my time at MCS,” he said. “They have stuck around, and will stick around, for a long time. We never miss an opportunity to get together and hang out.” 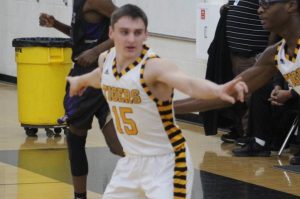 Those residual relationships and the lasting sense of community, Gilleskie added, spiritually bolstered him through high school. Not going much farther for college can help on that front as well. Although even before his first class or game at WPU, he is already confident that his new Raleigh community will be more than geographically close to his foundational Durham-Chapel Hill bases.

“The way the school is run,” he said of MCS, “the classrooms are very much community-oriented. The whole school is. That’s definitely something I want to see at Peace. In fact, I have seen it the many times I’ve been there.”

Just as it helped pull him to Peace, basketball was a bonding thread between Gilleskie, his peers and guides alike at MCS. He fondly remembers Michelle Reader — then an Upper Elementary teacher in Room 602 — joining in the pickup games on the sport court.

Beyond that, he and classmates Julian Adler, Devin Brader-Araje, Jonathan Hale, and Nick Klipstein would play together at the YMCA and at summer camps. (As it happened, in the 2012-13 yearbook, Brader-Araje said, “I have gotten really interested in basketball, more so than last year.” The year prior, he expressed the same NBA dream as Gilleskie.)

When they were not involving themselves directly, the five soaked in high-end hoops action from the stands.

“During these years of watching and playing the game, I became determined to play basketball in college,” said Gilleskie. “This dream helped develop my work ethic. I became more committed to practicing and developing skills.”

As he moved up the ranks and kept absorbing the infectious passion, wisdom and encouragement of others, that commitment also translated to giving back. As a junior at CHHS, Gilleskie was recognized at the Chapel Hill Rotary Youth Leadership Awards (RYLA) for excellence in community service. 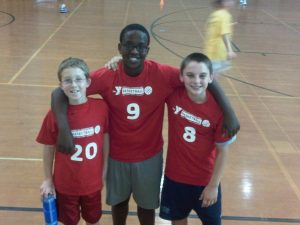 As one of three RYLA recipients in 2018, Gilleskie spent three days at a motivational fellowship camp. RYLA expressly designs its conference to both reward and renew every attendee’s pledge for community involvement.

Ask Gilleskie to recount his takeaways, and he will say the program unequivocally fulfilled its mission for him.

“The one thing I really got from it is to be more confident,” he said. “After I left the camp, I was a lot more confident in everything I did, and it helped me get noticed on the basketball court.”

Now that he will be a varsity collegian at his next official game this autumn, the keen eyes he draws going forward will not only be those of scouts, coaches and peers. Raleigh-area youth figure to fill his old shoes by turning to him and his fellow WPU Pacers for influence.

In the final week of June, Gilleskie got a jumpstart on his relationship with that sector of his new fan base by working at a youth hoops camp on campus. Boys and girls between the ages of six and 15 came for four days of fundamental instruction.

When the Hermann Athletic Center’s scoreboard flashes back on for formal competition, Gilleskie will value the number of returning faces to the facility as much as he does his rebound collection, if not more so.

“Most children look up to older people, especially athletes,” he said. “So the more community service one does, the more kids you can inspire.”