Grace and Courtesy in Elementary 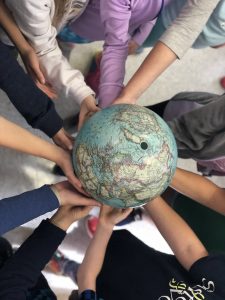 As moral activity develops, he [the child] wants to use his own judgment, which often will be quite different from that of his teachers. There is nothing more difficult than to teach moral values to a child of this age; he gives an immediate retort to everything that we say, having become a rebel…An inner change has taken place, but nature is quite logical in arousing now in the child not only a hunger for knowledge and understanding, but a claim to mental independence, a desire to distinguish good from evil by his own powers, and to resent limitation by arbitrary authority. In the field of morality, the child now stands in need of his own inner light. (To Educate the Human Potential 4)

At MCS, we strive to create classroom communities that allow students to exercise their mental independence through large group projects: the Parents Night Out events, Stone Soup Lunch, planning the D.C. trip, just to name just a few. The students have the freedom to choose their own work but must demonstrate responsibility by completing their tasks in a timely manner and turn in good quality work. Students practice creating their own societies through nominating and electing their class leaders who, in turn, solicit community input to solve immediate class concerns. Collaboration, fairness, and respect are the cornerstones of moral development at this age. Respect is the broader umbrella through which students practice mindful and meaningful ways to communicate with each other.

The other day, a student’s feelings were hurt because he felt his peers were teasing him and “ganging up on him.” He brought the issue to a teacher, who in turn gathered all the participants and facilitated a conversation among the boys. As soon as the young man had stated the issue, one of the other boys owned up to his part in the teasing, took responsibility for his actions and empathized with the aggrieved student. One of the other boys insisted, however, that since the aggrieved student did not ask them to stop, they had the right to continue. Through thoughtful, deliberate conversations, the boys mutually agreed that teasing was hurtful and not a good way to demonstrate respect. Is this a life lesson? A mere lesson in grace and courtesy or are we planting the seeds for a peaceful world through positive conflict resolution?