Over the Sea to Skye

Once upon a time…My dear friend and colleague, Judy Martell, had an inspired idea.

Together with former MCS parent and benefactor extraordinaire, Laura Brader-Araje, they came up with the Teacher Enrichment Award (aka TEP). The idea being that after the school year was over, during the summer months, teachers needed recharging. So whatever bliss a veteran teacher who had been at MCS for over 3 years had could get a grant and follow said bliss. The summer experience did not necessarily need to be of an educational nature, only something that would inspire a teacher and thereby enrich their soul.

I had this idea brewing just under the surface of traveling to see the misty and mysterious far reaches of Scotland. Although I have not a dram of Celtic DNA, though my wife and sons do, I have always been drawn to Scottish lore, music and culture (food not so much). I put in the application last February, calling it “Sacred Sites of Scotland — Places of Peace and Power” and patiently waited to hear. In early April, I was notified by my wonderful friend and colleague, Rochelle Hayes, to the sound of Scotland Forever played bagpipes (on her iPad), that I had won the grant. 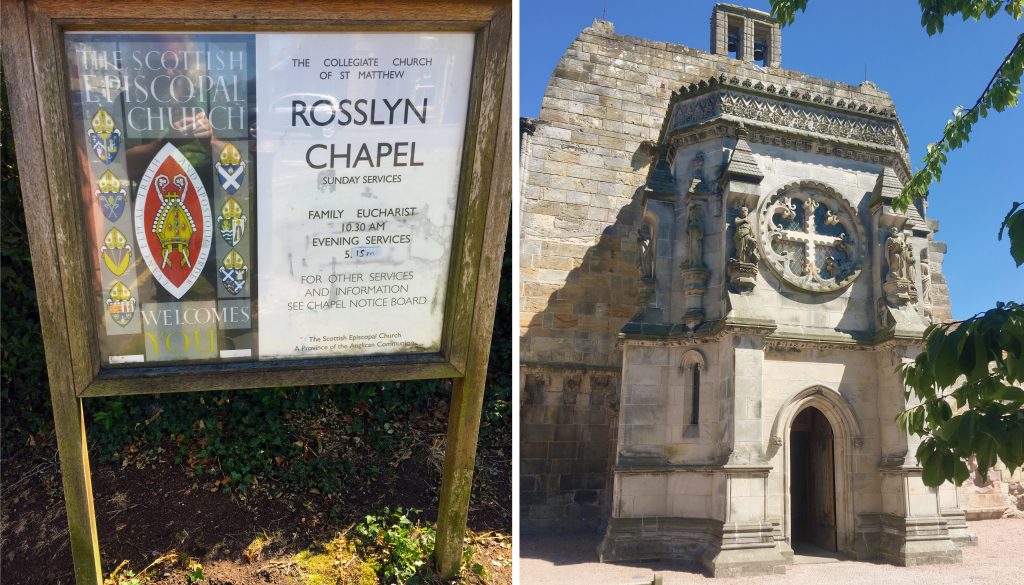 So after reading anything I could devour about travel in Scotland, I planned the trip down to the details of which way one had to circle the roundabouts. On July 1st, along with my wife Susan, (an LE teacher at Willow Oak Montessori), we departed RDU for the long flight to Edinburgh, and points north. After spending 2 days in Edinburgh, getting our bearings, taking in the city and trying desperately to cut through the occasional thick Scots accent, we took a side trip to the fabled 15th century Rosslyn Chapel. Those familiar with The Da Vinci Code and Knights Templar lore know what a mysterious place this is reported to be. It did not disappoint as we viewed over 100 whimsical Green Man faces and heard the many legends and arcane facts that surround Rosslyn.

From there, we drove cautiously on the left side of the highway north to Inverness, the capital of the Highland region, on the shores of fabled Loch Ness. We visited Castle Urquhart, on the western shore of Loch Ness, yet only had a slight glimpse of Nessie, the Loch Ness Monster, to the wonderful town of Dores across the loch. We traveled next up to the Isle of Skye, an ancient Viking territory, via Eilean Donan Castle, the most photographed Castle in Scotland.

Once crossing the bridge to Skye we realized that we had entered into a land of many fables and lush locales. After wandering around the island as best we could in our rented Prius, we came upon the northernmost city on Skye-Uig (old Norse for “Bay”). There we discovered our favorite spot on the trip, The Faerie Glen, which lived up to its name. 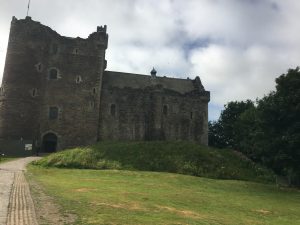 After seeing the mist covered Cuillin Hills, we sadly left Skye heading south across the highlands to the city of Stirling. There we visited Castle Doune, filming location for Outlander, Game of Thrones and most importantly, Monty Python and the Holy Grail. We thoroughly enjoyed the audio tour by Python Terry Jones, stopping at the many spots seen in the film.

Also in Stirling, we visited the William Wallace Memorial, from the Braveheart story. It was on top of a very steep pathed hill, and from its 167 castle steps, one could see for 40 miles.

Next, we returned to Edinburgh, climbing up to the Edinburgh Castle, the Royal Mile and the very sweet Princes Street Park —Edinburgh’s version of Central Park — where we relaxed and enjoyed the warmest (70 degrees) summer in 19 years that we were blessed with, fearing cold rainy days which we only had a few hours. Our trip sadly came to an end, too soon, and we came home on July 11th. Missing the unique beauty and wonderful friendly Scottish people the moment we left.

All in all a great adventure — thank you Judy Martell and MCS for the amazing journey to Scotland. I feel honored to be the first recipient of the renamed Judy Martell Award in her memory. She would smile and laugh heartily hearing of all my adventures and experiences…