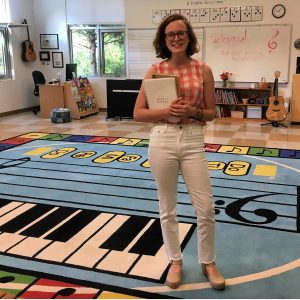 Sarah McCombie continues to lead by example, even after leaving her former career in education.

A lifelong musician who channeled her expertise as a music teacher at the Montessori Community School for her first three years out of college, McCombie chose to follow her heart, opposite husband Austin McCombie, last year.

Together, the McCombies are a new incarnation of the Chatham Rabbits, reviving the name of a prior North Carolina folk band. Sarah specializes in the banjo while Austin, a former financial advisor, strums the guitar.

Since this past summer, the two have cleared a lane with intent to take their locally-influenced vocals and strings national.

“Our instrumentation is very much old-time,” McCombie allows. “But our songwriting and structure is a lot more open-ended, and is based on what feels right to us, not necessarily tied to any specific tradition.” 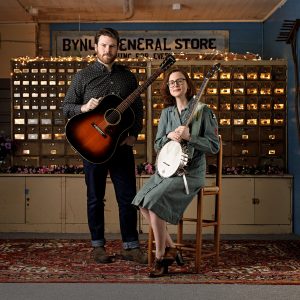 What felt right to her at the end of the last academic year drew no shortage of support from abrupt ex-colleagues. She singled out veteran MCS teachers Holly Dykes, Sabine Howe and Don Henchel among her topmost “cheerleaders.”

Through the Chatham Rabbits, McCombie returns to a familiar regimen. While an undergraduate at William Peace University, she formed a trio with another husband-wife duo, the South Carolina Broadcasters.

The two original Broadcasters — Ivy and David Sheppard — gave her a crucial next step after she spent her teen years performing her original works at local open mics. They were also the first to convince McCombie to take up the banjo.

Perhaps most crucially, the Broadcasters’ act paved the road for McCombie’s current endeavor. During their three years performing together, their young addition met Austin, whom she wed post-Thanksgiving in 2015, the same year she graduated WPU and started working at MCS.

Having been home-schooled for the better part of her upbringing, McCombie was drawn to a curriculum that emphasizes the individual student’s strengths and interests.

“By teaching at MCS,” she said. “I learned to make a lesson out of any situation and to put together a three-part lesson, where the students are creating and becoming themselves, instead of simply relaying the same information I gave them.”

In addition to her specialty in the music room, McCombie spent her third year as one of three teachers overseeing the school’s Adolescent Community. On her watch, the MCS equivalent of seventh- and eighth-grade students carried out an ambitious production of Broadway’s The Lion King. 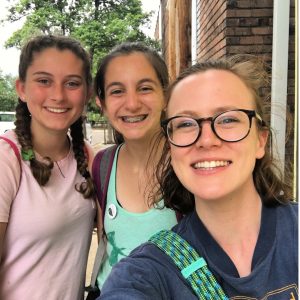 “Teaching music is something that comes super naturally to me, and something that I’m really fired up about,” she said. “I’ve learned from former colleagues like Don Henchel that when you (as the guide) are passionate about a certain subject, it’s so much more thrilling for your students.”

Based on her fellow teachers’ feedback since she chose to change her focus, McCombie’s palpable passion has kept goodwill afloat. With that said, she did not shy away from addressing the downside of no longer going to the MCS Durham campus every day.

“Teaching at MCS was a phenomenal experience for me, and I learned a lot about myself as a person, musician and teacher,” she said. “Following students through their passions and interests allowed me to dive deeper into subjects that I would not have otherwise explored.”

She added, “The students at MCS impacted my life in ways they will never know, and leaving them behind has been by far the hardest part about making the transition to being a full-time musician.”

McCombie is six months removed from teaching her last class and has already done 70 shows with Austin since. By her estimate, they aim to log 200 performances within the first year of their act.

The crux of the Chatham Rabbits’ rookie year will be promoting their debut album, All I Want From You. They have recorded the album under the Chapel Hill-based label, Robust Records, a specialist in roots music.

“It’s pretty great to be on the same label as our friends of Mipso and Hank, Pattie and the Current,” McCombie remarked. 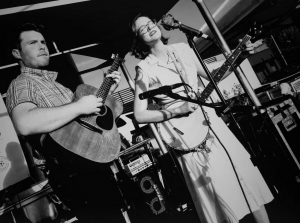 The album’s opening track, “Come Home,” bears a web of start-up connotations. McCombie and Austin co-wrote it early in their relationship while still at William Peace. As they lift off their new shared work life, the song could play a prominent role in proliferating their recognition.

“Come Home” is a candidate for the theme song of an upcoming talk show to be hosted by a fellow North Carolinian: Peabody- and Emmy-winning chef and TV personality Vivian Howard. If selected, the couple’s work will achieve instant national airplay through the syndicated program.

As it is, the Chatham Rabbits have already appeared before the camera, starring in an eight-minute segment on UNC TV’s My Home, NC in August. There they showed the RV they obtained via Craigslist and plan to make their dual residence-tour bus. Nashville audiences have already seen and heard the two in person, and the Rabbits have future plans for Maine and northern Michigan.

Of that first out-of-state experience, McCombie said, “We had a wonderful time and left feeling super inspired to continue doing what we’re doing.”